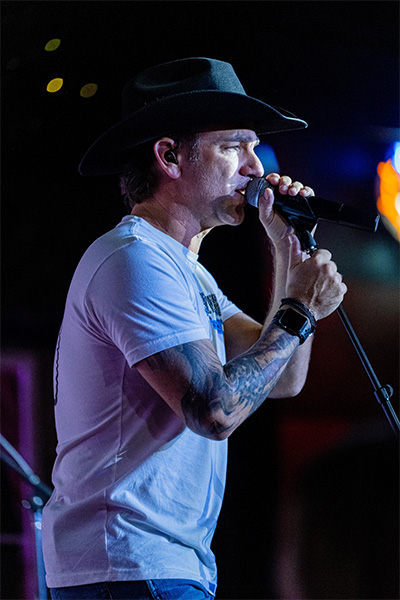 Craig Campbell and Toad spend some quality time together up in the Country AF Radio studio and talk kids and their sports, tiktok, how covid produced some amazing tunes like Never Mine and a new double album in 2022, the opening of Grindstone Coffee that doubles as a venue, Georgia Football, Family man and so much more!

Almost two years have passed since country hitmaker Craig Campbell has released new music. But in a world fueled by the smoke and mirror act of overnight success, Campbell has long been admired for his patience and persistence on the road less travelled. A consistent balancing act of traditional values and modern industry trends, Campbell is also considered by many to be one of the most talented yet under the radar stars, across all genres. And now, his highly anticipated single, “It’s About Time”, marks Campbell’s first independent release since parting ways with his former label, Broken Bow Records. It also highlights the first track the charismatic charmer has co-produced, along with playing acoustic guitar and piano, and singing his own harmonies. But this song is no stranger to the set list. In fact, Campbell has seized every opportunity in the last two years to deliver this sultry ballad to a captivated audience with just his airtight vocals and a piano.

After all, the magic of the keys brought him his hunger for music as a child. The good ole’ down home boy grew up playing his mother’s piano and singing in church. After graduating high school, he took a job as a corrections officer in his hometown of Lyons, Georgia. But music never left his side. Taking a cue from the sounds of classic country and idols like Travis Tritt and Randy Travis, Campbell started a band and played local and national bar gigs. When the guitar player quit, Campbell took that as a sign to chase his dreams all the way to Nashville, Tennessee.

With two rolls of quarters and a roll of dimes given to him by his mother for gas money, Campbell barely made it into town. Starting in 2002, the young hopeful would spend the next several years paying his dues the old fashioned way. A demo singer by day and Lower Broadway gigger by night, Campbell was eventually connected to a soon to be signed artist who needed a keyboard player. He and fellow South Georgia native Luke Bryan hit it off and Campbell got the job.  A year and a half long keyboard stint with Tracy Byrd soon followed, and on his non travel days, he took over as bandleader down at The Stage on Tuesday nights. His smooth chops and hot blooded stage presence soon caught the eye of industry execs and in 2009, Campbell signed with Bigger Picture Group.

His first single, the sentimental ballad “Family Man”, hit the top 15 on Billboard’s Country Airplay Chart in 2011. “Outta My Head” also cracked the top 15, while the catchy tune “Fish” garnered more than 10 million on demand streams. His 2014 breakout hit “Keep ThemKisses Comin’” was on its way up the charts when Campbell got the unexpected call that after two albums and a string of hits, Bigger Picture had closed. However, Campbell and his devoted team continued to press radio stations around the country, so much so that the single ended an impressive run well inside the Top 10, which is unheard of for a song with no financial backing.

Tim Montana rolls through Vegas like a Sharp Dressed man! It’ll make sense when you dive a little deeper!