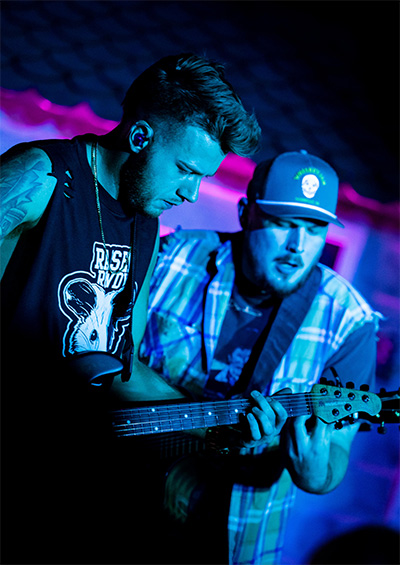 After Midtown and Toad talking college football, their hometowns, meeting in Nashville, leaving the Broadway shows to become original artists, the doubts of picking up and moving to Nashville, living in parking lots, basements and couches to sitting in label offices. We talked Sam Hunt, Carly Rogers, Warped Tour, Metal bands, Nickelback and even Creed their influences that got them to where they are today as artists!

Adam Ernst and Michael Rotundo are After Midtown. Their genre-bending sound is quickly creating a buzz in the Nashville music scene with their self-written debut single “Boys Like Us.” The duo came to life after gigging together as solo artists and discovering their prodigious chemistry as vocalists, songwriters, instrumentalists and maybe most importantly, being two small town guys with a passion to write great songs. With diverse influences and a flare for creating distinctive lyrics, Adam and Michael have written on all of the tracks from their debut EP, Don’t Give Away The Ending as well as playing guitar, drums and tracks themselves.

“We are proud of who we are, and proud of who we surround ourselves with and we feel blessed to be surrounded by such an amazing team all the way around … this song is kind of our anthem for that.”

A great team indeed, as the duo just signed a booking deal with CAA, a publishing deal with Sony/ATV and is managed by a strategic partnership between The Core Ent’s Chief Zaruk, Simon Tikhman and 10th Street Ent’s Scott Frazier and Chris Nilsson

Ryan Griffin and Toad getting to know TikTok a little better