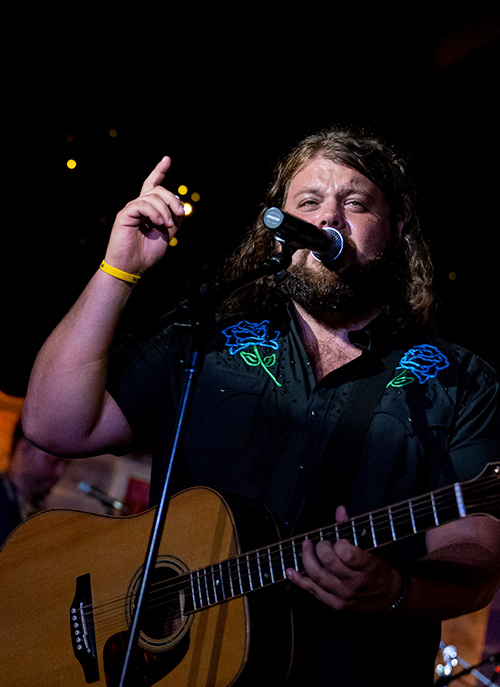 Dillon Carmichael and Toad hangin’ inside the Country AF Radio studios talking about his LARGE graduating class, working and playing the Opry, his 1st band, royalty in his family and it all starts off with his mad crazy IT skills! Let’s jump into it and get to know Dillon Carmichael a little bit better!

Since unleashing his critically acclaimed 2018 debut, Hell On An Angel, he’s toured with everyone from Lynyrd Skynyrd and Trace Adkins to Dwight Yoakam and Justin Moore, written a song for Travis Tritt’s latest album, racked up millions of streams on Spotify, gone viral on TikTok, and even gotten engaged. And while you might have expected the cancellation of a year’s worth of tour dates to finally slow him down, Carmichael instead used his pandemic downtime to head right back into the studio and record Hot Beer, a brand new collection of high-energy, feel-good country.

“I felt like my catalog could use a little more fun in it,” says Carmichael. “After putting out a record as heavy as Hell On An Angel, I wanted to make something faster, something looser, something that’d leave you with a smile on your face.”

Recorded with producers Jon Pardi and Ryan Gore, Dan Huff, and Phil O’Donnell, Hot Beer is all sly humor and raw heart, with tongue-in-cheek lyrics and double entendres lurking around every corner. Carmichael’s rich, velvety baritone is still very much front and center here, but there’s a newfound playfulness to his delivery that manages to offer up a knowing wink even as it breaks your heart. It’s a delicate tightrope for any artist to walk, but if Hot Beer proves anything, it’s that Dillon Carmichael is a songwriter who knows how to take his fun seriously.

“Whether I’m singing a tear jerker or a party tune, the only thing that really matters to me is that it’s a great song,” Carmichael says. “And great songs are honest songs.”