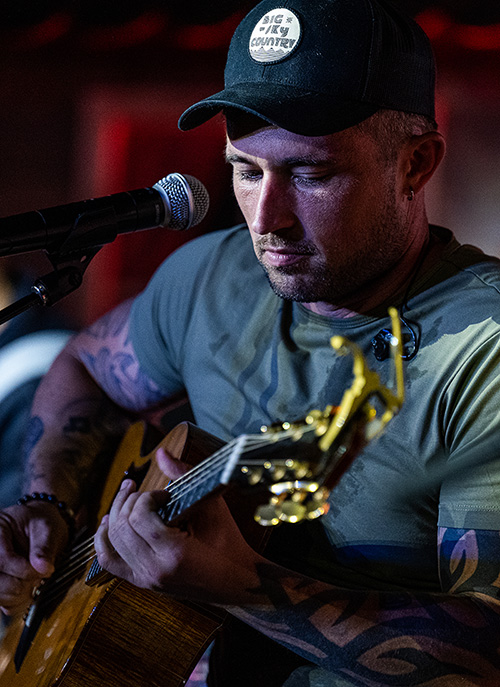 Michael Ray and Toad talkin’ inside the Country AF Radio studio about festivals, and the “real festival experience”, new music, playing arenas, Tim Montana, getting Toad to drink, the Opry and a lot more… Listen on in!

Michael Ray loves a good story. So, it’s only natural that when it came time to tell his own, he gravitated to country music. “I feel like in music in general, but especially in country music, the story-lines have always been the foundation,” he says. “No matter what changes may happen with the sound, I feel like when you listen to a song, no matter what walk of life you come from, you can really lose yourself in that song and put your own story to it.”

At age 10, after beginning to learn guitar, Ray says, “I started playing every Thursday through Sunday with my grandfather in groups he was in. I learned a lot that I didn’t know would help me where I’m at now.” As he practiced, he began to take in the influence of a disparate group of contemporary artists, including everyone from Garth Brooks to Green Day. He was hooked and knew what he needed to do. “I switched my high school schedule so I could play bars and stuff on the weekends,” he says, and his grandfather backed him every step of the way. “He knew that I wanted to take it further than just playing bars and stuff in the hometown.” And he did, beginning a several year stretch of paying his dues playing all around Florida and eventually expanding out to Georgia, Mississippi, Alabama and the Carolinas while picking up work teaching guitar lessons and installing phones. In between covers, from Keith Whitley to Snoop Dogg, Ray would slip in originals, building a name for himself as both a songwriter and performer. Fortunately, Amos was able to enjoy some of his grandson’s success. “Florida radio was playing some of our stuff, so it was really cool for him to be able to hear that,” he says. “He sadly passed away two months before my Opry debut, but the Opry was kind enough to let me play ‘Green, Green Grass of Home,’ a Porter Wagoner song I used to play with him and I used the guitar that he played for sixty years.” “I feel like this album is a big reflection of the last two years,” says Michael of the time between his debut and “Amos,” as he’s toured, recorded and enjoyed a taste of success. “I feel like I found my voice. And when I’m asked what made me get to this point, if you peel back all the layers it goes back to my grandfather.”